Poker a Game of Skill Conclusion 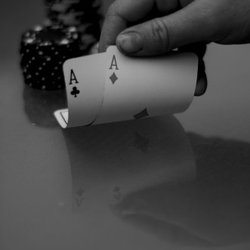 Some might argue that if a hand is completed with two or more players left in the hand, then the chance elements are predominant in determining the winner of the hand. I disagree and I think the evidence will clearly show that this is not true. In the game of hold ’em, it is easy to look back on a completed hand that went to showdown and see who would have won if everyone had stayed in to the end. This player was defined in section 5 as having the “Luckiest Hand” in Luck Hold ‘Em. It is easy to see who would win a showdown hand if the chance elements were to determine the winner of the hand. But we find that the “Luckiest Hand” only wins approximately 30% (data to be derived) of time when there is a showdown.

If the player in seat 2 was destined to win a particular pot if he had stayed in, but the player in seat 8 won the pot, there is only one explanation. Player 2 applied the skill element of folding to take himself out of contention for the hand. We don’t have to then get into the messy details of trying to figure out if player 2 played well to fold. It does not matter. When asking the question which elements predominated in determining the winner of the hand it seems quite obvious that if player 2 had not folded he would have won, and since he did not win, his fold was the predominant factor in determining that player 8 did win the pot.

Looking at the data we come to the simple conclusion that the betting and folding in a poker hand has a massive impact on who wins the hand. And, the cards seldom have the final say in the matter. In fact, less than 15% of the time (actual data to be provided), does a hand finish with two or more players left in the pot and then that pot goes to the player who would have won the hand if everyone had stayed in.

Though I feel I have proven that the skill elements predominate over the chance elements in determining who wins the pot, the task will become even easier and clearer if we can convince a judge that the outcome of a hand includes the size of the pot. As covered earlier, the betting and folding are the skill elements in the game. These elements are solely responsible for determining the size of the pot. Even if the cards determine that a certain player wins the pot, it will be his application of the skill elements that will determine how many players stay in and how much he charges them. There are no chance elements that force a player to bet in poker.

Therefore we can conclude that the pot size is 100% determined by skill. Remember, I am not saying that every pot is determined by skillful play. I am only saying that players, in an attempt to apply the skill of the game (the betting and folding), are completely responsible for how big the pot gets. Chance plays no part in this aspect of a hand’s results.

I feel confident we can prevail in convincing a judge that the pot size is an important part of a hand outcome. But even if we should fail on this point, we still have a winning argument.

We have seen that the skill elements of the game predominate in determining the outcomes of poker hands, but can a player use those skill elements to actually win over the long run? Empirical evidence abounds to support that this is true. Poker is an endlessly fascinating game, where real learning is taking place every time someone sits down to play. Though the choice of whether to call, bet or fold seems pretty simple, doing it correctly 4 or 5 times a hand is not easy.

There are a number of studies that show that making the correct decision in poker will lead insurmountable edges over time (attach them to this document). Poker is not a game where the better player wins every hand or every night. But, the better player wins almost every month and will certainly win every year. It takes patience, guts, psychology and a keen understanding of math to succeed at the game.

Poker is a true meritocracy. Young and old, male and female, white and black, they all have an equal chance to win. The player does not have to try to overcome an unbeatable house edge to win from a huge publicly traded corporation as when they play casino games. We all know that almost never happens.

Instead all they have to do is use their skill better than the players they are playing against. What could be fairer?

Whether poker is a skill game or not is a question every poker player has known the answer to for many years. How to win the argument in court has confounded the poker community for just as long. But by changing our angle of attack, we should be able to present the kind record before a judge that will prevail. We no longer are trying to show that a player’s edge will predominate over luck in a poker hand. This actually might be impossible to prove. Instead, we have defined skill as it should be defined; the elements in the game of poker that are completely in the control of the player. And we have gone on to further prove that since the players are attempting to apply these elements skillfully (whether skillful or not), these elements end up being predominant over chance in determining the outcomes of poker hands.

For those of you who live in the USA, we recommend playing poker at Bovada Poker! Read our review here!
Create your own review
Average rating:   1 reviews
Don
by Don
YES